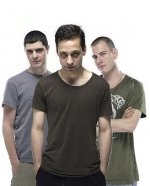 Assiduous readers will have noticed your reviewer’s sudden obsession with Turkey. I work in bursts and after my interest in Greek pop-rock, I decided I should enter the world of Turkish rock. After falling in love (almost literally) with singers like Sevval Sam and Sezen Aksu - who possess truly unique voices - I decided to examine the world of rock n’ roll a little more closely... It was my greatest pleasure to discover a really great band: Duman.

Let us start with the beginning... What does ‘Duman’ even mean? Well, it in fact means ‘smoke’ which tells you exactly about Duman’s beginning. The band’s first record was heavily inspired by the likes of Nirvana and Pearl Jam. Videos of the band at the time are almost confusing - were it not for the Turkish lyrics, you might even confuse the band members with an early 1990’s grunge band of your choice. There is one pretty good reason for this. Kaan Tangöze, the band’s singer and lead guitarist, lived in the town of Seattle during the early nineties... Meanwhile his friends Ari and Batuhan lived in Turkey and fed upon all the music produced in the USA’s West coast. And this explains in large part the seemingly smoked induced compositions - mellow music that often breaks into trance-like intensities.

The first album, Eski Köprünün Altında (Under the old bridge) was released almost ten years ago and has since been followed by... almost shockingly, only two albums! However, the low number of releases is easily explained by some difficulties that were experienced along the way by the band. One good example is the fact that Kaan was pulled out for almost a year to do his military service (perhaps he should have stayed in Seattle!?).

Frankly though, the three albums are very addictive. It would clearly be a pleasure to discover their coming records and I am standing by impatiently but Duman’s motto is simply ‘Quit work; Make Music’. And this is exactly how the band has pursued its existence. If you want to hear Duman, the albums are all well and good but you truly need to get your arse off your chair and see them live. The number of gigs that Duman does is almost inhuman. Their time ‘working’ (i.e. actually recording stuff in a studio) is relatively limited. They truly come across as a live act... and recently the band has taken to touring the rest of Europe (and even the USA for a few dates) where the Turkish immigrants are devout fans. How could you not appreciate a band of great friends who get together and have fun like they did ten or fifteen years ago... and who happen to have been succesful enough to make a living of their music?

A compilation entitled En Güzel Günüm Gecem was released in 2007 (actually a brilliant way of getting to ‘know’ the band). However, I would almost recommend you checking out the band’s live album as a first-hand introduction to the world of Duman. It is so rare to hear a live recording that tells you so much about a band... Usually, the sounds are muffled and the energy is lost in the screams and roars of stoned under-age kids. Konser is a rare exception... A demonstration of Duman’s abilities as a live act as well as a confirmation of the trio’s (they usually play with drummers that are friends... this changes fairly frequently, hence ‘trio’ for a four-man band) ability at song-writing. Key-words are dark and - paradoxically - energetic! A song like “Bu Akşam” (Tonight) is a testimony to this paradox, with Kaan singing that tonight “he drinks” on a superbly catchy rhythm.

Seriously, not understanding Turkish is not a problem. Duman is a great band that deserves to be listened to beyond boundaries, whether these be territorial or linguistic!