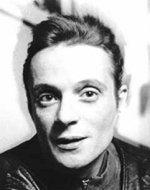 Mano Solo has this strictly Parisian- outcast touch or soul. This doesn’t imply some sort of discrimination against regional bands, but makes it more appreciable when travelling in Mano Solo’s fief, that is 18th arrondissement Barbès-Place Clichy area. His pain seems attached to the beauty of that popular part of Paris. Because all of his music evolves around his suffering, Mano Solo is a Mano disturbingo (notice the rhyme!); his "état d’âme" (mood) haunts his songs as much as his sickness kills him. We are all bound to die, it is just a matter of time and in my case God keeps the pre-emptive limit secret. In Mano Solo’s case, AIDS have established his deadline and the man keeps on extracting the pain his body and especially his mind are living with; but as a consequence Mano Solo is more alive than ever. In fact, although all his organs cry with possible pain, only his mind, the mirror for his pain explicit spiritual pain such as solitude, relations (good and bad), no-future feelings... quite basic stuff which he describes with more truth than any other musician and singer I have ever heard. Actually that can become a problem because there is no limit for him to tell us about how he feels; I find him indiscreet and too revealing to point where his suffering is incomprehensible.

Mano Solo has always been a punk with no future; les Frères Misères (literally Misery Brothers) is the band with which he revolted himself against society whereas his last musical creations are turned towards himself and his life as a sick man. But his music is not a way to discharge himself of his pain but really to kick life in the ass and prove to himself that he loves living. But it is quite difficult to describe the man because of the perplexity his attitude induces, and it seems to be a delicate subject to link his pain to his music, but what he does is poetical, sensible and open.

"Mano Solo cries out his loathing of life, his anger to affront the world, but he is no fool, knowing he is his "worst enemy". A man with fortitude. He brings up to the surface the transcendental scars, everything that hurts you and kills you. And he screams, and rips his voice which is unusable anymore anyway. Perhaps he screams to remind (himself) he exists. Just genuine stuff, like a trash painting painted with great knife slashes in his skin. Words that yell or lacerate; torn apart with contradictions." This is what Pauline wrote about his music.

The music he composes is not as one might believe depressing, but surprisingly (!) has a definite french style, that is guinguette-like swing, one could dance to. He plays the rhythmic guitar and is surrounded by 5-8 musicians, essentially based on the accordeon and guitar with a clarinet and chords. He plays light but convincing tunes which blend perfectly well with his harsh and outspoken texts. He is not particularly revolutionary, but simply truthful and I believe he is a major french artist with a definite style, a self imposed name and a strong character. There are many other things to say about this man (his drawings, his local revolution: l’International Sha la la...) but find out by yourselves!