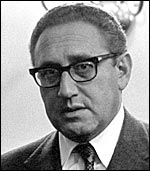 I woke up today, Sunday, with a certain feeling of aimlessness. I was tired, and went downstairs in the kitchen to drink a coffee which I hoped would change me. I sat down and found a week end issue of The Guardian someone had left on the table. On the cover was the title of the main article, "After Pinochet, Should Kissinger be Next in the Dock?"and, yes, this article was dealing with the hidden history of the US after the second world war, a political issue you must admit we don’t hear much, or enough, about.

Kissinger, a German American is mostly famous for his surprisingly remarkable professional career, from an academic to a politician charged with US foreign policy. He served both the Nixon and Ford administrations from 1970 to 1976, that is, when US foreign politics were changed. Nixon’s speech in 1971 was about abandoning active and direct intervention against isolationist states, after the human catastrophe of the Vietnam war.

The US since the 1970s moved from straightforward and publicized "containment" policy against political regimes rejecting world trade and capitalist development, to a strategy more concerned with dictating the "Free world" order through international conspiracy and secretive military operations or assistance against "isolationist", "Communist" states rejecting multinational corporate control of world resources or the drainage of capital worldwide to the Northern economies.

In fact, abandoning public and direct world intervention proved to be very accomodating to Kissinger and the US administrations. First, propaganda and war justification were not needed as much as in the Korean and Vietnam war, where the Communist enemies had to be demonised, since conscription was abolished after the Vietnam war in the US. It was no more necessary that the American people should know and be "informed" about the activities of their government, or that this government should make efforts to justify its foreign policy, since they were not actively needed except as taxpayers and economic productive<units.

Second, American politics in general were reconfigurated. It is not the question that the motives of American politics changed: since 1945 really, the US assured it will struggle worldwide for the preservation of "peace, freedom, prosperity", that is, a struggle worldwide for the preservation of its own economic freedom of action to invest and exploit world resources in peaceful areas, and to prosper from this.

But, between the second world war and the 1970s, the American people were always sollicited to support their governments’ aim at guaranteeing the world order they wanted to impose. Massive propaganda campaigns were launched, paralleled only in this century by Nazi Germany and Stalinist Russia in the 1930s or the Maoist regime in China. Communist witchhunts were broadcasted, the ideal of a good American citizen was defined as a paranoid voyeur spying on his neighbours, friends, colleagues, even his own family. In the 1950s, society in America was subjected to deep internal, psychotic fear of dissidence and plurality. Freedom of thought, toleration and liberality were themselves attacked as subversive.

When American society did move a strong muscle in the 1960s against the US government, and started often to become a threat to "public order", (pacifist movements and demonstrations, the Black Panthers, etc.) the American state understood it could neither maintain anymore its rigorous control over its "free citizens", or request their devotion or lives against communism and other isolationist movements.

The state in Washington and its many affiliated federal organs have thus decided their foreign policy was to be shifted underground, and would have to rely on methods and strategy which could be effective without the participation of the American population. And this is where the Chief of accusation against Henry Kissinger begins.

The guy was honoured with the Nobel prize for Peace in 1973, the same year when the US finally got what they were collaborating with the Chilean miltary for since 1970: the destruction of Allende’s presidential mandate in an old and well-established Latin American democracy through Pinochet’s coup. Allende was one of the few best socialist revolutionaries of this century: he combined a revolutionary conception of social change in his country with purely democratic and parliamentary methods.

When Pinochet’s tanks and planes invaded the Presidential residence, La Moneda, like if it was a missile-protected military fortress, they were shooting at clerks and officials armed with guns and the parade presidential guard. Allende fought and died with his colleagues during the siege. The CIA and Washington itself had dreaded his anti-multinational foreign policy, and decided to destroy decades of Chilean democracy, peace and order to replace it by a power-hungry decorated psychopath, when Allende nationalised the American copper industries in Chile, who were, by the way, making 200% benefits on copper exploitation.

Pinochet hired the filth in his army ranks and in society to lead an extermination campaign against any militant organisation, even some radical ecclesiastics, whether it was political or not. People were forced down into silence and submission through perverted torture methods, assassinations, and deportation into concentration camps. Horror equaled the absurdity of the regime: there was no real ideological legitimacy of Pinochet’s dictatorship, and the government’s projects for the nation was simply that of intense liberalisation and opening to the world market. Chile as a nation was defined as chaotic, and repression was justified as necessary. The human, cultural, intellectual, social loss was terrible in the 1980s and 1990s, but some economists and others will tell you that economically speaking, Pinochet’s ultra-liberalism did do a lot of good...ah...well, as long as there is profit, what can we complain about?...

Why should we be preoccupied with the fact that the Chilean intelligentsia and culture was thriving before Pinochet, and destroyed and crippled during his rule? Artists, independent journalists, writers, musicians, politicians, humanitarian or health organisation members and activists were murdered in the dozens of concentration camps, but "peace and prosperity" are being restored with the opening and liberalisation of Chilean markets, and now Chilean society has the most widespread middle class in Latin America.

You’re sick reading this, aren’t you? Well, if you’re not, you should get the hell out of here anyway. But if you are, then you probably now realised that this is the mentality of our dear politician leaders. Because they do not give a fuck about the raped Chilean woman, or the castrated, disembodied dead man lying in the concentration camp’s torture room. They come to you and say 60% of the Chileans belong now to the "middle class".

Kissinger got the Nobel prize for peace in 1973.

In 1976, he shook hands with Pinochet, and assured him that his remarks about human rights he was about to make to the Organisation of the American States were not to be taken seriously.

He was also responsible as the chief coordinator of US foreign policy to help the massacre of communists in Irak under the Ba’ath (Saddam Husain’s party), he lead the bombing of civilian targets, supposedly "Red Guard" targets in Cambodia and exhausted US military intervention in Cambodia and its Vietnamese neighbour.

He is generally an astute politician who guaranteeded the interests of his administration and the electorate of his presidents. He wasn’t a psychopath, he wasn’t a terrorist, he did not believe in violence, repression or hate. He just valued them as nessecary to impose the interests of his state and government in countries and societies that didn’t matter much to him.

Well, I am fully woken up by now. Zdenek